We are only 19 days into 2018 (as I type this), and already we are getting into ‘peak absurdity’ level in regards to Public Health.

In 2007, England finally fell in line with Wales, Scotland & Ireland and banned smoking from all public enclosed spaces. Since then, we have countless years of the likes of ASH pushing to expand the boundaries of the smoking ban, culminating in 2017 when we saw efforts to ban smoking from beaches, parks and other open-air spaces, and in some cases succeeding.

Of course, smoking was banned from being advertised on radio and TV many years ago, the ban eventually extending to cinemas. This was quickly followed by the ban on Tobacco Companies sponsoring sports events. Those of us a certain age can all remember cricket being sponsored by the likes of Benson & Hedges. Rugby League was also sponsored by Tobacco Companies in various guises, e.g. the Silk Cut Challenge Cup. Then there was snooker with competitions such as the Embassy World Championship.

Perhaps the most iconic sporting images of all time were to be found in Formula One. Who can forget the Marlboro Mclaren decked out in the distinctive orange and white livery, the Rothmans Williams Renault decked out in blue & white, or the all-black John Player Specials driven by World Champion Mario Andretti and his team-mate, the late Ronnie Petersen ?

There were many, many more examples that I bet you can all remember.

Of course, after the ban on advertising, this was the only way that Tobacco Companies could promote their products. But of course, the slippery slope is neverending and soon tobacco control succeeded in extending the ban to stop tobacco companies sponsoring any sporting event (or indeed any type of event at all).

So, quite naturally, sports and sports teams had to move on to other forms of sponsorship. The breweries and other alcohol manufacturers and vendors were quick to fill the void. So we found rugby events such as the Heineken Cup (European Cup), the Magners Pro 12 etc. Football also followed suit and we had the Carling Cup (League Cup) and the Budweiser Cup (FA Cup). Many rugby and soccer teams also managed to secure alcohol sponsorship which was often seen emblazoned across the front of jerseys.

But in recent years, public health has also started moving against alcohol sponsorship of sports teams and tournaments, declaring that such sponsorships are damaging to the health of the public. Think about this. They have not quite got there yet, but how much longer do you really think it will be before they make moves to get alcohol banned from sport sponsorship/advertising in exactly the same way as tobacco ?

The latest trend has seen many sports teams becoming sponsored by betting companies. This is far more prevalent in soccer than most other sports, but considering that soccer is by far the biggest sport in the UK and, given the plethora of gambling options that you can find on soccer matches these days, it is hardly surprising.

Inevitably, in an obvious case of scope creep, gambling is being claimed as a public health issue these days with organisations like Public Health England calling for a clampdown on the gambling industry. Now, aside from a flutter on the National Lottery, I can in no way be considered a gambler. I think I have only ever been in a bookies on one occasion (with a mate who wanted to lay some bets on the horses) and I have never ever set foot in a casino. Hell, I don’t even have an occasional flutter on a fruit machine. But even so, I have to agree with Chris Snowdon

Which brings me to tweets I have seen appearing from one of the most sanctimonious and joyless ‘person’ I have ever seen working in public health – Robin Ireland. 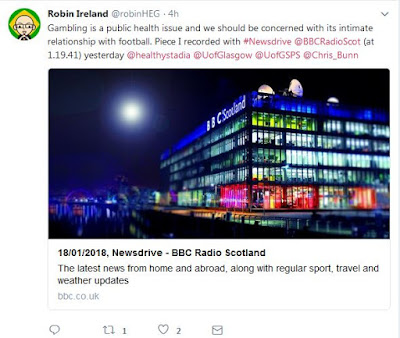 So, basically, Robin wants to see a ban on the Gambling Industry sponsoring soccer. Presumably he would like to see this applied to all sports, and he is not alone. There are countless more like Robin in the public health industry who think that gambling is an illness that public health should be concerned with. Their way of dealing with it is taken from the Tobacco Control manual and that is to try and ban advertising in all its forms. It is as clear a case of scope creep as one can imagine.

I surely cannot be the only one who can see the pattern forming here.

Tobacco advertising was driven out of sport by the zealots.

The zealots are also trying to drive alcohol out of sport.

Now they are making moves to drive gambling companies out of sport.

Given the current outcry against sugar, salt and so-called ‘junk food’, it is only a matter of time before cries ring out to try and ban companies like Coca-Cola, McDonalds & Pizza Hut from advertising in sport.

Where will it end ?

Will Financial Companies be banned from advertising/sponsoring sport because their products may result in risky investments ?

Will Automotive Industries be banned from advertising/sponsoring because they are promoting risky driving ?

Will energy companies be banned from advertising/sponsoring because they have not invested in sufficient green technologies ?

The way things are going, it will become increasingly difficult for Sport, or indeed ‘Arts’ events like music festivals, to find any way of getting sponsorship because the largest and most successful companies on the planet are banned from any involvement. There will be a growing number of sports teams and tournaments chasing an ever dwindling list of companies that are allowed to sponsor them. The inevitable result will be the decline of sports teams and an increase in costs to the followers of such sports.

Enjoy these days, because the way the public health racket is panning out, our children and their children will never get to enjoy or experience the world the way we have. Sport will cease to exist if it cannot find sponsorship/advertisers, and Public Health is constantly seeking to limit who is allowed to do the sponsorship/advertising.

Finally, the TV and Film Industry rely on sponsorship/advertising. Take those away and there will simply be no content to watch on TV or in the cinema.

Could Public Health actually turn out to be the death of modern civilisation ?
Posted by Jester at 03:42