A Billion Lives – What Are Public Health Officials Afraid Of ?

Around the UK, people have been applying to host a screening of the award winning documentary ‘A Billion Lives’. To date, two screenings are confirmed – Glasgow and Swansea. Others have not yet met their minimum quota of reservations to guarantee a viewing.

Much has been made of the apathy of Vapers around the country in not supporting the screening of this film, but Vapers are not, and should not, be the focus for this film.

The people who SHOULD be coming to see this film in droves are the Public Health officials, blinded by ideology, and the Politicians who form laws and regulations based on those ideologies. But these are the very people who will not see the film unless Vapers around the country rally to the cause and reserve tickets for the different screenings being planned all around the UK.

In Swansea, the numbers have been achieved because local Vendors have got behind the rallying call in association with Vapers In Power. I believe a similar scenario was achieved in Glasgow through the efforts of the NNA’s Andy Morrison.

The problem is the old ‘you can lead a horse to water but you cannot make them drink’ scenario. I am aware that many Scottish Public Health officials and MSP’s have been invited to the Glasgow screening that takes place in 26th October, but I am led to believe that very few have accepted the offer.

Likewise, at Swansea screening (Swansea Odeon, 23rd November, 6pm) the plan is to invite Welsh Public Health officials, AMs, MPs, councillors and even representatives of charities such as Tenovus, Cancer Research. An invitation is even been extended to the man charged with Health of the Welsh nation - Welsh Chief Medical Officer – Dr Frank Atherton – all with the offer of free tickets.

The question has to be asked, if such people truly believe in the health and well-being of the Welsh public, then why wouldn’t they attend?

So, to re-emphasise the title of this post, What Are Public Health Officials Afraid  Of ?

IMHO, any refusal by such prominent figures to attend or acknowledge the existence of the film puts them in the very same category as many of the figures and organisations featured in the film. It demonstrate that the very people sucking from the public teat claiming to be protecting Health are more motivated by money and care not a jot for the health of the Welsh public. It will PROVE that this subject has never been about health.

In the USA, A Billion Lives had a special screening at the Senate in front of many of America’s most prominent politicians.

So let’s see what our so-called ‘Guardians Of Welsh Public Health’ do ?

What will our Politicians do - especially the misinformed ones like Mark Drakeford ?

Will they come and see the truth ? Or will they simply run away and hide, scared that the real truth is finally coming out, and on the big screen ?

So what is ‘A Billion Lives’ ?

Created by Aaron Biebert it examines the history of smoking and the corruption that has led to the current situation in which healthier alternatives are banned or heavily restricted in most countries and the cigarette trade is continually protected.The title of the film is derived from the claim (from the World Health Organisation) this century a billion people are projected to die from smoking.

The film goes on outline the history of the tobacco industry, including discussing the various ways in which the tobacco companies tried to hide the effects of tobacco and tobacco products on their users. Throughout the film, you hear from people such as David Goerlitz (the Winston Man), Derek Yach (former Head of Tobacco Control for WHO and the architect of the FCTC), Clive Bates (former CEO of ASH) and many more of the world’s leading Public Health professionals.

It then describes the attempts the tobacco industry has made to stop e-cigarettes from encroaching on the money-making abilities of the large multinational corporations involved. It examines many of the reasons many people are critical toward vaping, before showing how money is integral to the tobacco industry's survival. Tackling issues such as the involvement of pharmaceutical corporations and even governments in dealings with tobacco companies, the documentary reaches out to find out why there is such a negative bias toward vaping. Culminating in an extensive breakdown of how much money is at stake in the hands of tobacco and pharmaceutical industries, as well as Government,  A Billion Lives covers a wide range of topics related to smoking.

A Billion Lives has already won several awards across the globe, including: 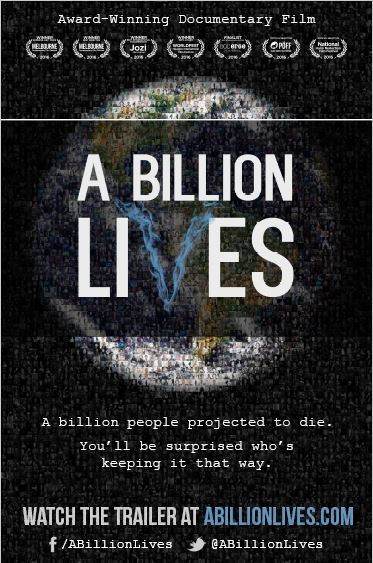