Shadows In The Dark

What Is An Advocate ?

This is a question I have pondering for some time now. You see the word used in all manner of contexts in the ever-evolving world of Vaping. To some, the mere fact that a person may bitch and moan on Social Media about the unfair treatment of Vaping, makes that person an advocate. To others, it means somebody who regularly blogs on the subject. To yet more people, one only becomes an advocate when one takes direct action.

The dictionary definition of an advocate (at least insofar as the website Dictionary.com defines it) is the following: 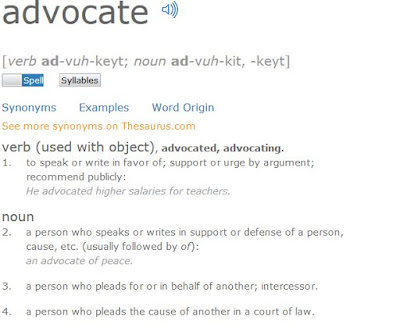 So if you take that explanation as gospel, then all of the scenarios above would be correct.

But isn’t all this merely a matter of perception ?

The point I am trying to make is that advocates attract all manner of abuse. Some from the ‘enemy’, but increasingly much of the abuse is from what I would term as ‘friendly-fire’.

What makes it so unacceptable is that the more one puts oneself ‘out there’ as an advocate, the more people seem to think that you are ‘their property’. You no longer exist as a person, but rather you are now a figurehead that is up there to be shot at, criticised, brought down. The point is, each and every ‘advocate’ will have their own views and, whilst your common ground may be the acceptance of eCigarettes in general society, that person may well hold other opinions (like how to achieve the end-goal) that differ from your own.

Despite this, I am continually seeing more and more blogs whose sole-purpose appears to be to denigrate and belittle the very people who are fighting to save vaping.

The NNA has been a prime target in recent months. I have read several blogs who attempt to attack the work of the NNA, or attack anything the NNA say ... and those attacks have NOT been coming from 'the enemy'. In fact, some of those blogs have even gone so far as to personally attack NNA Board Members. This something I find absolutely incredible as most of the general public will be completely unaware of much that the NNA undertakes. There are many reasons for this, but suffice to say it is by necessity that the NNA has to keep quiet on many subjects until they are formally announced. If people had any idea just how much work the NNA actually does, they would not be so quick to criticise.

I will be perfectly honest. I am GLAD that very few people have any idea who I am or what I do. The more known you are, the more abuse you seem to attract. I am anonymous enough that I can easily walk through most crowds in a Vape event (of any description) and not be bothered or recognised. That leaves me free to hear what people are saying. It helps me to learn whether what I am doing has any support. It also allows me to quietly organise how to fight against Vape-bans and other legislation, who I need to talk to, when/where I need to talk to them.It also enables me to let others know what the 'word on the street' is.

The reason I personally read such a wide range of blogs is because I like to try and get the widest perspective possible because of the type of people that I have to deal with day-in, day-out over the past three years. It is no secret that I have met with a few politicians in face to face meetings. Sometimes successfully, sometimes not. For that reason, it helps to know the position their political party has, so I read their blogs. If that politician also has a personal blog, I read that too.  It also helps to read the blogs of their supporters. It always helps to have at least some background and understanding of where they are coming from first before I deal with them. My part in the Vaping revolution may be small (and insignificant in many ways), but it is always best to be prepared

So, am I an eCigarette Advocate ?  My honest answer would have to be NO, but I am Libertarian.

That may surprise some of you, but I suspect the vast majority could not care less about my answer.

Yes, it is true that I first started getting involved in public life due to the evidence-free persecution of Vaping. But the more I look at it, the more I realise that it is not just the persecution of Vaping that is getting me fired up. It is the general and gradual erosion of all of our personal liberties is firing me up these days, eCigs just happens to be one part of it.

I don’t want to be the drone that the Public Health lobbyists would like us to be, living a boring black and white event-less existence. It is my body and if I want to take risks with it, I will. It is not Government’s or anyone else’s business.

So, before you blog, before you hurl insults on social media, just think about what an advocate actually is. That person may well be (and probably is) doing a hell of a lot more behind the scenes than you realise. This is especially true of the 'Faces' - that is, the people who are well-known in the field of vaping advocacy. They may 'seem' to be 'vaping aristocracy' flitting from Expo to another, or going from one radio/TV show to another, or moving from one conference to another, but there is also a LOT of hard work going on behind that. It is all consuming of time and attention.

...and remember that Shadow you barely see in the background. That's probably me. You may not recognise me or know me, but I am there, listening and watching :-)
Posted by Jester at 13:26 No comments: