In my last blog, I suggested that another way of changing the minds of the Labour AMs would be to target their seats in the forthcoming Welsh Assembly Elections to see whether party loyalty means more to them than their jobs. To that end, I endeavoured to gather the information required to see where Labour are most vulnerable. The result is the table below, sorted into ascending order showing the seats with the smallest majorities first.

Unfortunately, these blog building sites are not very 'table-friendly', so I have had to insert the table below as an image. If you are having trouble reading the text, then click the image and it should open into a larger format. 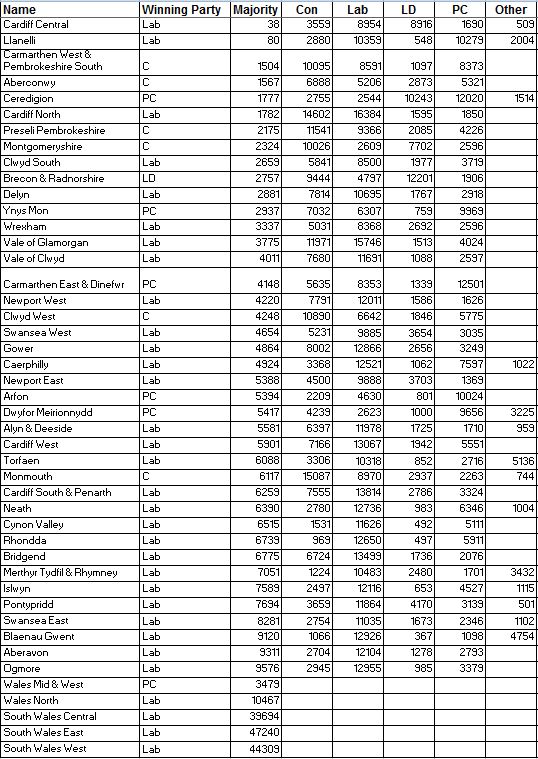 What the above table does not show you is the 'UKIP effect'. This is simply because UKIP did not field any candidates in the last Assembly Elections. However, they did field candidates in last year's General Elections. Whilst they did not win any seats in Wales, they did put up a strong showing in many constituencies. Contrary to what Labour will have you believe, much of the votes that UKIP took were from Labour. For this reason, UKIP are going to be an unknown in the Assembly Election. Many observers believe that they will succeed in getting a number of Regional AM's. This is possible given that Regional AMs are selected through Proportional Representation. However, Constituency AMs are voted in a straight contest and I honestly cannot see UKIP gaining a Constituency AM. What they will certianly do is 'dilute the vote' and so could have a strong influence on results for other parties.

For reference, the following table shows the results for all Welsh Constituencies at the General Election 2015. 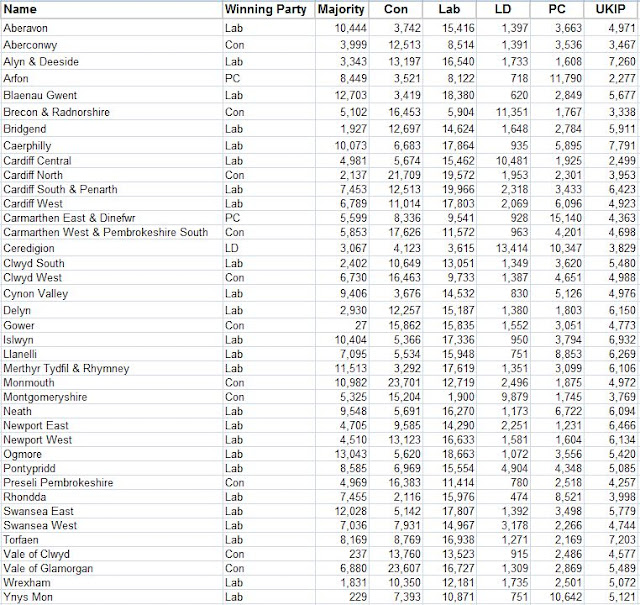 Based on the results of the last Assembly Elections, and on what happened in the General Election, I now present my top 5 seats where we have a realistic chance of getting rid of Labour AMs and their attempts at block-banning vaping in enclosed public spaces.

Cardiff Central: Held at the 2011 Assembly Elections by Labour with the smallest majority of any seat - just 38 votes. The main opposition in 2011 were the Liberal Democrats. Since then it is fair to say that the Lib-Dem vote nationally has imploded. But I am not so sure that the same will happen in the Assembly Elections. Furthermore, the Lib-Dems have selected the popular Eluned Parrot to contest this seat in 2016.

My verdict: Eluned is a well-known and outspoken member of the Lib-Dems. Despite the national implosion of the Lib-Dem vote at the General Election, they still ran Labour close in Cardiff Central. Eluned's popularity will help their cause greatly and I think she stands a good chance of succeeding. Also, the Lib-Dems have been strong supporters of vaping in Wales. Time to repay that debt and support the Lib-Dems in this seat.

Llanelli: If I recall correctly, this seat has a habit of changing hands quite regularly. It is currently held by Labour's Keith Davies who won the seat with a majority of just 80 over Plaid Cymru's Helen Mary Jones. However, Keith Davies is standing down at the next election and it is not yet known who will stand in his place. What is known is that Helen Mary Jones will be standing once again for Plaid Cymru. Can she win ?  I would say Yes. Plaid have a strong following in Llanelli and always put up a strong showing.

My verdict: Whilst I do not know Helen Mary Jones views on vaping, I would suggest that any AM other than a Labour AM is a better bet for Vapers. So I would strongly advocate supporting Plaid here.

My verdict: Vapers should support the Conservatives in this seat as they must be seen as the hot favourites to win it.

Clwyd South: Currently held by Labour's Ken Skates with a majority of 2659 over the Conservatives. The Conservatives have selected Simon Baynes to contest the seat this time around. I do not know anything about Simon, but given that the AM in neighbouring Clwyd West is Darren Millar, I would imagine that we can quickly find out about him. Plus I would expect that he and Darren have quite a bit of dialogue.

My verdict: Simon Baynes has a significant task ahead of him in overturning a majority of 2659 from the last election. Labour also took Clwyd South in the General Election by a similar margin. However, the Conservatives are the best bet for taking this seat from Labour so my advicer to Vapers would be to support them.

Delyn: Currently held by Labour's Sandy Mewies with a majority of 2881 over the Conservatives. However, Sandy Mewies is standing down at the forthcoming Assembly Election. There is no news as yet on who will be taking her place as Labour Candidate. Neither can I find any news on who will stand for the Conservatives. Mark Isherwood stood as the Conservative candidate for this consituency in last year's General Election - which he lost by just under 3000 votes. I have met Mark in person and know that he is a friendly, intelligent, informed and knowledgeable man. He also supports Vaping. It wouldn't surprise me to find that Mark contests this seat.

My verdict: Winning the seat will be a big ask, but once again the Conservatives (whoever they select) are probably our best bet as Vapers to support.


I have highlighted the Top 5 Labour Seats to target for tactical voting. Please remember that the Lib-Dems and the Conservatives have been a united voice in opposing the ban on vaping in enclosed public spaces. Where the Lib-Dems and Cons are protecting small majorities, help them by supporting them. It is no use in targetting Labour seats for tactical voting if we then lose our biggest supporters from other seats.

Also, Plaid Cymru AMs have (in the main) been staunch supporters of vaping. The only Plaid Cymru AMs that have supported Mark Drakeford's crusade to ban vaping are Elin Jones (at the HSCC - she is also trying to defend a small majority) and Dafydd Elis Thomas in the Senedd vote. Plaid's overall continued support is vital.